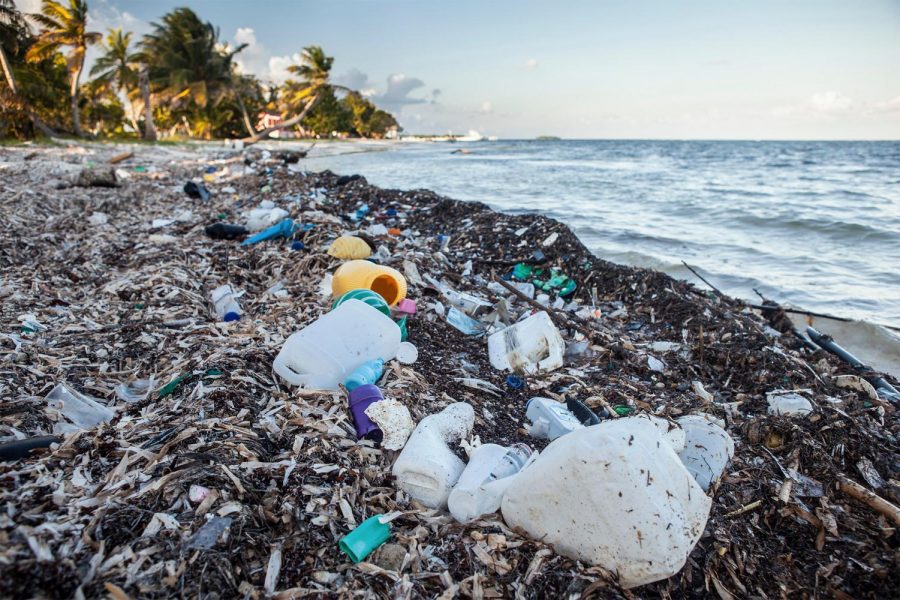 Imagine the perfect day at the beach—warm sand, cool blue waves, a successful fishing trip. Now picture your trip twenty years from now. Will it look the same? Scientists think not, due to a silent crisis that is rapidly getting worse: discarded plastics are swallowing our seas. An estimated 110 million tons of plastic are in the oceans right now, with a whopping eight million metric tons added every year; this is equivalent to 64,000 Statue of Liberties. A July 2020 report from the Pew Research Center stated that if no immediate global action is taken, 1.3 billion tons more could drift out to sea in the next two decades.

When it comes to the environment, plastic is particularly harmful because it is nearly impossible to decompose. Most plastics take a millennium to break down in ocean water. For this reason, it is dangerously easy for plastic to collect in vast fields in oceans across the globe. In fact, according to the New York Times, there are roughly five gigantic accumulations of plastic and debris clogging oceans. For scale, the Great Pacific Garbage Patch is roughly twice the size of Texas. These fields of plastic include everything from takeout food containers, to cigarette filters, to discarded fishing nets.

One of the most immediate and heartbreaking effects of plastic in the oceans is on sea animals, which become tangled in floating debris. What isn’t as commonly recognized is that minute plastic fragments that can barely be seen are also dispersed throughout the ocean. After years of weathering, non-biodegradable products turn into small microplastics, wreaking havoc on the ecosystems they encounter. For example, when a fish ingests these tiny debris, they are not excreted from its body, but instead can cause serious liver damage, and in many cases death. Other animals then feed on those that have these chemicals in their systems, putting their own health at risk. Not only animals are directly impacted: a 2019 study published in the Washington Post showed that microplastics in the oceans block sunlight from reaching below the surface of the water, depriving phytoplankton and oceanic vegetation of energy. Phytoplankton are a root of many marine food chains, so when this link of the chain is compromised, plastic in the ocean affects the lives of many more sea creatures than those that are directly trapped in plastic fields.

The effects that plastics have on the oceans also finds its way up the food chain to humans. Fish such as tuna and salmon are examples of animals that take in these pollutants through their diet, yet also happen to be among the most popular fish that humans consume. When an animal ingests microplastics, it enters their digestive system and circulatory system, being absorbed into the surrounding muscle tissue. So the next time that sushi or smoked salmon is on the menu, keep in mind that there’s a likelihood that the plastic bottle that was tossed out may be on your plate.

To understand possible solutions, we must first consider the causes of the problem. Nearly everyone encounters plastic in their daily lives these days, and unfortunately many do not discard it responsibly. Most plastic in our oceans comes from carelessly disposed trash. Streams, wind, and rain carry much of this to open oceans. Aquaculture and fishing industries also contribute to this issue when gear gets lost at sea or is deliberately discarded. Ineffective government regulations and poor sanitation practices in much of the world allows the problem to go on. The question remains: what can be done?

At this point in time, plastic is a part of the lives of nearly everyone on earth—it’s nearly impossible to stop using it. Incinerating it is not a smart option because when plastic is burned, it releases tremendous amounts of toxic chemicals and gasses into the atmosphere. Instead, local and national governments need to step in and create an efficient way to deal with landfill and keep it out of the ocean. Additional steps from governments can be incentivizing companies to produce and use biodegradable plastics and make them a part of our daily lives. Efforts can also be made toward doing a better job collecting trash, and charging larger fees to shipping companies and cruise ships for dumping trash into the ocean. The problem of plastic in the ocean is so large that most of the solutions that are promising require governments or organizations such as the United Nations taking charge of the situation, and making widespread decisions that lead people to dealing with plastic in a more responsible way. It’s also important to realize that many of the people who dispose of their trash in rivers, do not have any other sanitation options.

As stated in the Pew article, in the next two decades, there will only be a 7% impact with the current efforts that only seem to fixate on small things, such as specific products and how they are used. Whereas if more large-scale improvements were made, rates could go down by up to 80%. Yet that cannot happen until people globally choose what’s best for the planet and make responsible decisions on how they deal with plastic, whenever possible. As more people choose to be conscientious of their usage and disposal, the closer the world is to fewer seas of plastic.