Performing in a Socially Distant Play 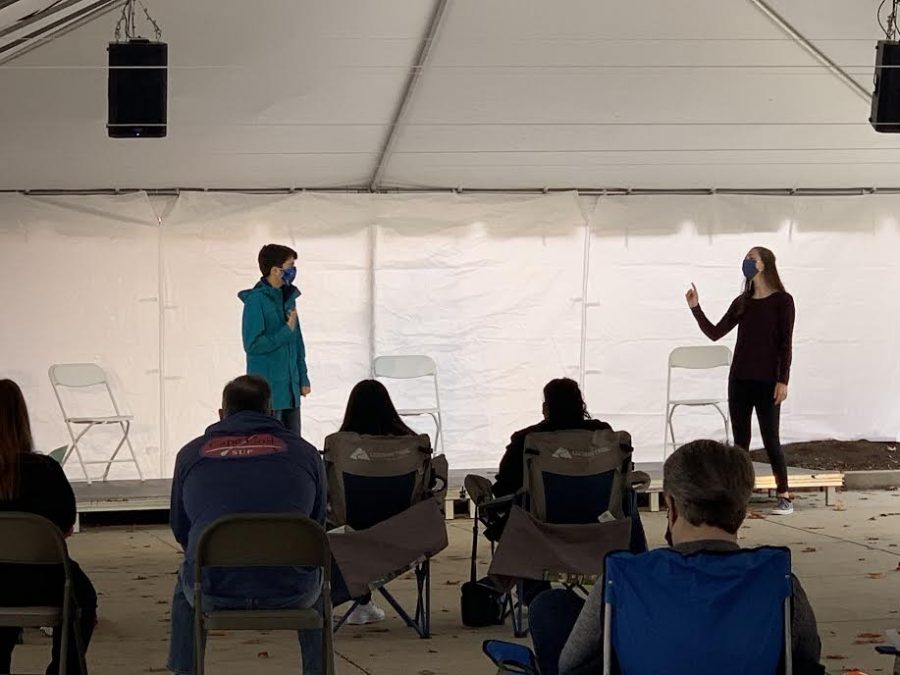 With a click, I was logged on.
Usually, auditions entailed all of the theatre kids sitting in the black box and doing some scenes or some improv, anxiously watching others’ performances as we waited for our turn, performing in groups, hoping to earn a role in the latest LSB Players production. Then, a few days later, we’d await a callback list or a cast list with eager anticipation, mulling around the A-200s in our free time in hopes we’d be the very first one to see it.
But instead, there I was, sitting in front of a computer in my bedroom on a Google Meet, the director and my classmates mere boxes on my screen.
I had known since the summer that things with the LSB Players were going to be different, to say the least, in the wake of COVID-19 and hybrid schooling. It didn’t really matter to me – I was just happy to participate in theatre, no matter how different it would feel.
Instead of the typical musical in the fall, the LSB Players announced they were putting on two short one-act plays: “Superheroes: With Great Power Comes Ordinary Responsibility,” a humorous show about how superheroes spend their time off, and “Everything Seems Like Maybe: A Stay-at-Home Play,” a more somber show in the format of a series of monologues about the impact of the pandemic based on the real words of students. I was thrilled to be cast in the latter, having never done a show so topical before.
We launched into rehearsals and it almost felt normal. The first couple of rehearsals were on Google Meet, then we began rehearsing in person, outdoors, socially distanced, with masks. Admittedly, I wasn’t particularly optimistic. I doubted that these new rehearsals would have the same sense of livelihood and camaraderie that I loved most about LSB in the first place. However, when I arrived at my first in-person rehearsal, I was proven completely wrong.
Almost immediately, I was talking and laughing with my friends like we had never stopped. No one let the weight of the pandemic get them down, and everyone was genuinely excited to be there and supportive of each other, just like they would be if there was no pandemic.
That said, there were naturally some challenges. It’s a lot more difficult to make sure the audience can hear what you are saying when you have a mask blocking your face, even with a microphone, not to mention you now have the added challenge of making sure you are six feet apart from your scene partners at all times – but we were up for the challenge.
The entire rehearsal process whizzed by, and in what felt like the blink of an eye, the day of the show arrived. Some things were the same: doing our group warm-ups before the show, playing games backstage, and being able to perform for a live audience again.
Of course, those things were also different: instead of being indoors like usual, warm-ups were in the parking lot, where all the passing cars and pedestrians could see us (and hear us) yelling and singing and jumping around. The “green room” was a tent a few hundred yards away from the stage and “backstage” was behind a bush. And of course, the live audience was all masked and distanced.
Still, it was amazing to be in front of an audience again – in any capacity. I didn’t realize how much I had missed it.