Top 5 Moments of the MLB Playoffs (So Far) 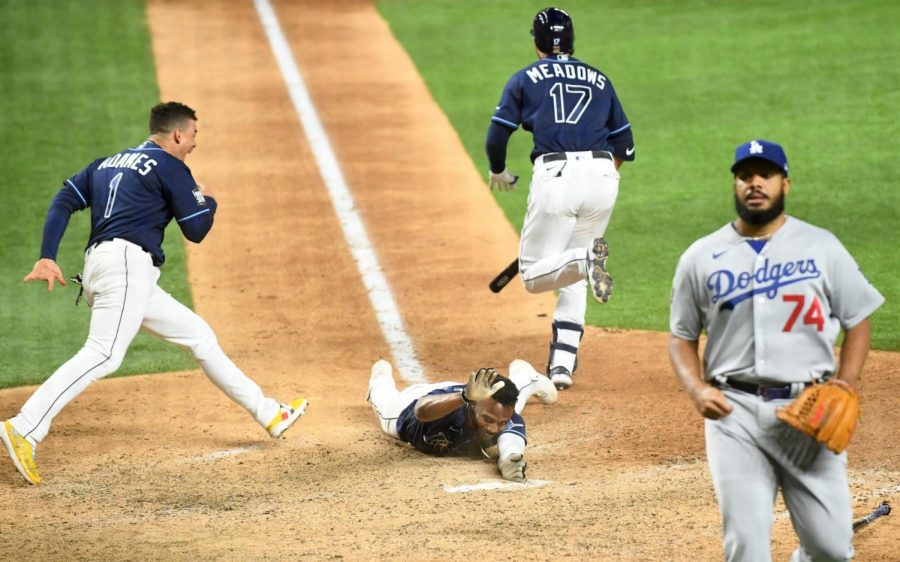 Randy Arozarena scores the winning run in Game 4 for the Rays. Photo courtesy of the LA Times.

Like all sports, the MLB postseason has looked drastically different in the 2020 season. However, this does not mean that we as fans haven’t been able to see the highest of highs and lowest of lows. Despite the lack of people in the stands for many of the games, baseball has still turned out numerous classic moments in the 2020 Playoffs.

This moment was the perfect convergence of the most exciting talents in baseball. And that is not an exaggeration. In game two of the best-of-five series between the Dodgers and the Padres, the Dodgers were winning 4-3 in the seventh inning, already having won the first game of the series. There were two outs and a man on second base. On the mound was Brusdar Graterol, one of the hardest throwing and most energetic pitchers in baseball. At the plate was Fernando Tatis Jr., widely regarded as one of the most–if not the most–athletic ballplayers. In centerfield was Cody Bellinger, the 2019 NL MVP and one of the faces of the Dodgers franchise. Now the action. Graterol threw a 99 mph fastball and Tatis crushed it to dead center. Bellinger raced back, reached up, and robbed Tatis of a go-ahead two-run home run. Graterol threw his hat and glove into the air in celebration. Bellinger went ballistic. Padres third baseman Manny Machado ran out onto the field swearing at Graterol but it made no difference. The Dodgers lead would hold, and Los Angeles sent the Padres home the next game, completing the sweep.

The Yankees and Rays faced off in a competitive five-game series. The fifth and final game was tied at one in the bottom of the eighth inning. The pitching throughout was incredible. That was when Mike Brosseau stepped up to the plate against Aroldis Chapman. Back in the 2016 World Series, Chapman gave up a game-tying home run that almost lost the Cubs the series. Just last year, Chapman surrendered a walk-off home run to Jose Altuve that sent the Astros to the World Series and the Yankees home. And yet, here he was again with New York’s season on the line. Facing him was Brosseau. Earlier in the regular season, Chapman threw a fastball at Brosseau’s head, nearly starting a brawl between the two teams. Now, Brosseau had a chance at revenge. After fouling off pitch after pitch, Brosseau concluded a ten pitch at bat by shooting a 100 mph fastball over the left field wall for a go-ahead home run. The Rays would close the game in the next half inning, finishing off the Yankees season.

Before the 2020 playoffs, only the 2004 Boston Red Sox had completed a comeback when down 3-0 in a series. Thank god that is still true. Facing the Rays in the ALCS, the Houston Astros found themselves down three games to none. However, Houston stormed back winning the next three games, including a thrilling game five which ended on a Carlos Correa walk-off home run. In game seven, Tampa Bay’s pitching showed up once again, and the Rays won 4-2, saving themselves from what would have been an absolute choke.

The Atlanta Braves are one of the most exciting young teams in the MLB. In the NLCS, they found themselves one game away from the World Series. Unfortunately, they were unable to close, losing three consecutive to the Los Angeles Dodgers. In the pivotal game seven, Atlanta left runs on the board with numerous blunders on the basepaths. The Dodgers capitalized, and an absolute moonshot followed by a bat flip from Cody Bellinger put the Dodgers on top, sending them to the World Series.

This might be the greatest game of baseball I have ever watched. Starting in the bottom of the fourth inning, and lasting until the top of the eighth, a run was scored in every half inning, setting a World Series record. There were monster home runs, lead changes, and momentum shifts, but nothing could prepare for the final play of the game. Down by one run with two men on base and two outs in the bottom of the ninth, Brett Phillips came to the plate for the Rays. Phillips was not even on Tampa’s roster for the ALCS, and his last hit was exactly one month before game four. Naturally, Phillips delivered an RBI single to tie the game. That’s where things went from weird to insane. Centerfielder Chris Taylor misplayed the ball causing Randy Arozarena, who began on first base, to try and score the winning run. It seemed like a close play might occur at the plate, but Arozarena tripped, giving him no chance at scoring. But the relay to the plate was wild, and catcher Will Smith was unable to make the play, scoring Arozarena and winning the game for the Rays.