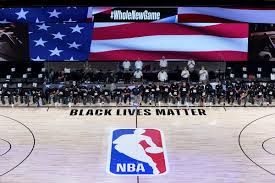 NBA PLAYERS kneel for the national anthem ahead of a playoff game. Photo courtesy of the Associated Press.

Near the end of June, The Forum ran an article about how sports leagues have been dealing with the current racial climate in America. Since then, there has been action taken throughout the world of sports. Large sums of money have been dedicated to fighting for racial justice and many symbolic gestures have been made by leagues. However, the most impactful of these actions was the sports-wide boycott that took place in the wake of the Jacob Blake shooting near the end of August.

When Jacob Blake was shot in the back seven times while being arrested by police in Kenosha, Wisconsin, the country was rightfully outraged. People had already been protesting for George Floyd and Breonna Taylor, and Blake was just another horrific example of police brutality in America. At this point, the NBA and NHL bubbles were underway as well as the MLB season. Just three days after the shooting, the Milwaukee Bucks, who typically play about an hour away from Kenosha, chose to boycott their playoff game against the Orlando Magic. In response, every game in the NBA that day was canceled. Games the following day were also postponed, including a Celtics playoff game against the Toronto Raptors. The NHL also chose to postpone all playoff games for a day.