Ruth Bader Ginsburg was a pillar among women and Democrats for 87 years, 27 of those as a Supreme Court justice. The Wall Street Journal describes the late justice and feminist as “a pioneering legal luminary and de facto leader of the court’s liberal wing.”

The Notorious RBG passed away on September 18, 2020, leaving a vacancy in the Supreme Court. Trump has recently nominated Amy Coney Barrett, a conservative judge, to fill RBG’s seat—but Ruth Bader Ginsburg should not be replaced until after the upcoming presidential election.

Barrett’s appointment would change the balance from five conservatives and four liberals to six conservatives and three liberals and, although it is only one person, every vote matters in a ruling. The addition of Barrett to the already conservative majority would threaten Roe vs. Wade, the Affordable Care Act, gun regulation, and LGBTQ+ healthcare and protection. Indeed, Barrett has publicly endorsed “the value of human life from conception to natural death…and the indissoluble commitment of a man and a woman,” which are common pro-life and anti-LGBTQ arguments, in a 2015 letter addressed to Catholic bishops.

Additionally, after 27 years of persistently fighting for causes she believed in, The Wall Street Journal reports Justice Ginsburg’s “most fervent wish” on her deathbed was that her victories not be reversed by a conservative replacement: we should respect her final wish.

The Congressional Research Service reported that the average time to confirm a justice after they have been nominated is two months. With less than 40 days until Election Day, any nomination or confirmation would have to be extremely rushed. Not to mention, Justice Scalia passed away during Obama’s final year of presidency and Obama hoped to replace his vacant position. He was not able to do so because, as CNN reports, Republicans believed the “next President ought to choose,” and refused to even grant a hearing for Obama’s nominee. Now that the positions are switched, many Republicans are ready to allow Trump 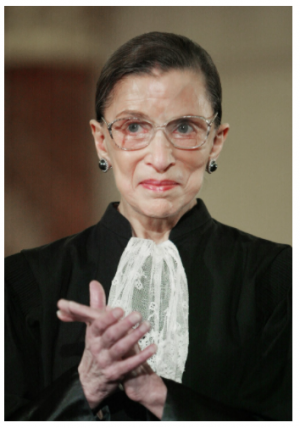 to replace Ginsburg immediately. Senate Republicans believed that it was wrong to replace the conservative Scalia with a liberal justice, but are now fully prepared to replace liberal Ginsburg with a conservative. This is blatant hypocrisy.

The Senate currently has a conservative majority, so they favor replacing Ginsburg before Election Day. However, Biden believes that voters should first vote for their president, who will then nominate a new justice. We should honor Ginsburg’s legacy by allowing the American people to first choose their president, instead of hurriedly filling Ginsburg’s vacancy before the election.