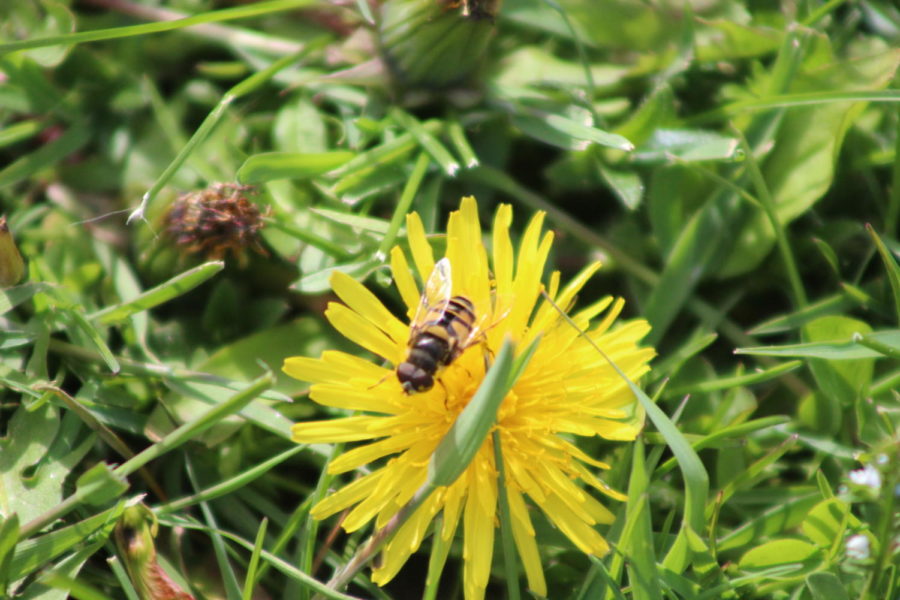 A hoverfly on a dandelion.

We did it! We got through the coldest time of winter and now spring has really sprung. Life is exploding out of everywhere: birds are singing, insects are buzzing, and squirrels are chasing each other in trees. It may feel like sensory overload at times, so here’s a guide to help you figure out what to look for in nature this time of year.

Instead of looking in specific habitats for different types of animals and plants, this guide will make each section about different groups of animals. With so much happening everywhere, it’ll be easier to look for certain kinds of life wherever you go. By focusing on certain groups, it can also help break down what is happening for those groups during the spring.

Our first featured group is a feathered one: birds. Birds are always singing, but spring is when birdsong really erupts – almost the whole day is filled with it. While we can hear the birds singing, it is harder to spot the singers themselves. Birding by ear can be tricky at first, but it definitely pays off once you learn it. The first thing to think about is what the overall song is like. How long is it? Does it have one note or many? Are other birds responding? This can help you narrow down what your options are. Another tip is to learn the songs of the birds you see the most. Since those are so common, you’ll mostly hear just those birds. Learn these birds’ calls one at a time. It is easy to get overwhelmed, so just pick one bird and learn its song until you know it really well. After that, you can move on to another bird and then another, and you’ll be a bird song expert in no time!

Birds aren’t the only critters that sing this time of year; amphibians are becoming much more visible. These critters include lots of different species from singing peepers to salamanders crossing roads to turtles laying eggs, this is a crucial time of year for reptiles and amphibians. Massachusetts has 7 frog species, 3 toad species, 11 salamander species, 10 turtle species, and 14 snake species. These amazing critters can be found in almost every habitat from suburban yards to swamps. As they begin to hop, crawl, and slither this time of year, they face several challenges. The most widespread challenge faced by these animals is crossing roads. Reptiles and amphibians are especially vulnerable to being hit by cars when they travel to reproduce. Amphibians often cross wet or flooded roads on rainy nights in early spring as they travel to small pools to lay their eggs. Reptiles don’t travel in as large numbers as amphibians, but they do travel to lay their eggs in a secure spot. Keep an eye on the road this time of year and drive cautiously on rainy nights. Many of these species are endangered, so they need all the help they can get.

Another hallmark of spring are insects, especially mosquitoes. While the negative effects of insects are most often displayed to the world, Earth as we know it would be very different without them. Insects are crucial pollinators, decomposers, and parasites. Insects account for about 75% of the pollination in the United States alone. This number does not count just the bees and butterflies, but wasps, flies, and even mosquitoes. Male mosquitoes are important pollinators, it is the females who can annoy us on a summer’s day. Insects also help break natural material down. Ants, termites, carrion beetles, and the larvae of many species all chew up detritus which makes it easier for decomposers to recycle the resources of that organic material. Lastly, while parasites may sound like it is a bad thing, parasitic insects keep a check on the populations of other organisms. Wasps are perhaps the most famous family of insects that parasitize other species. There are many species of wasps that lay their larvae in other organisms, such as spiders or even other wasps! Not only are insects important predators, they are critical prey for countless other animals. Since insects are so widespread, they are a key food item for birds, mammals, reptiles, amphibians, and even fish. Take a moment to appreciate some insects this spring as they start to emerge, even if you need some bug spray.

You can’t talk about spring without mentioning all the adorable baby mammals that are born this time of year. Every species of mammal in Massachusetts has babies this time of year. While some have litters every year, there are a few species whose offspring take years to mature. Black Bears are one of these species. The cubs stay with their mothers for two years, learning all the skills they need to survive. American Beavers also have their kits for two years before they move on to a new habitat. Unlike bears, beavers have litters every year, so the kits from the previous help take care of their younger siblings. On the other end of the spectrum, there are other mammal species that can have multiple litters each summer. Squirrels, chipmunks, and other rodents can raise and wean their young in a matter of weeks! Watch the mammals around you this time of year. They often stay close to their dens, so if you see a mammal hanging around an area, their den is most likely nearby. Don’t follow the mammals though, it would be the same as if someone followed you to your home!

Now, when you go out into the natural world around you, you can have an idea of what is going on for all the groups of animals. As spring progresses, watch the changes happening around you. The wonderful thing about spring is that nature is changing rapidly so we can watch the world around us literally spring into life. Even if you just have time to glance around on your way to school, just take a look every now and then to appreciate the beauty of the natural world. Enjoy your spring!!