Notes from a Naturalist: March 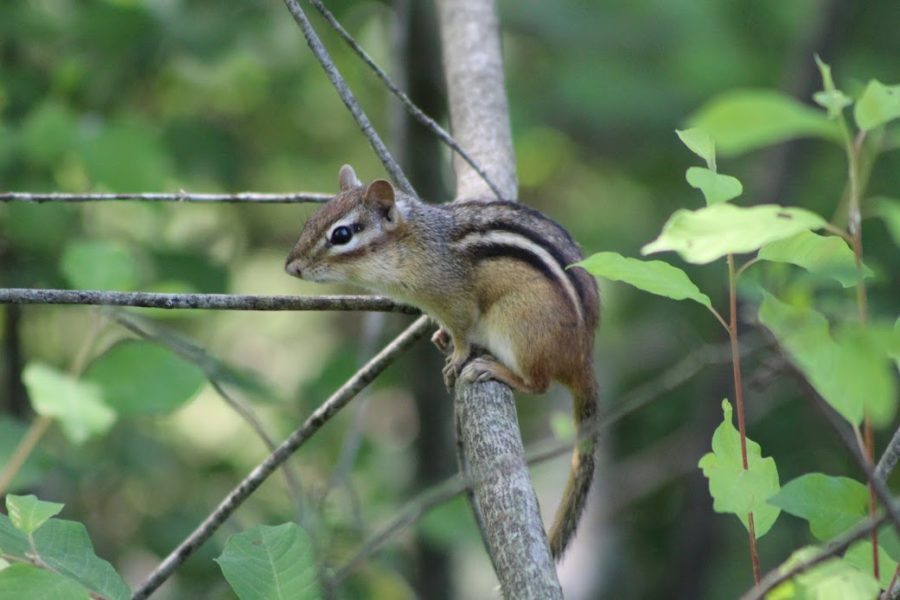 The Eastern Chipmunk is on the Move this Time of Year

Bald Eagles are one of the most famous American birds, it is the national bird afterall. Easily recognizable with a white head and tail, yellow bill, and dark brown body, these magnificent raptors can have wingspans up to 80 inches and can weigh almost 10 pounds. Bald Eagles primarily hunt fish, but they will also eat reptiles, amphibians, or mammals if there are no fish available. Bald Eagles were previously listed as an endangered species because their populations had plummeted due to pesticide use in the mid 20th century. Thanks to breeding programs and bans on certain pesticides, their population has grown over the past few decades. During this time of year, Bald Eagles are fixing up their nests in preparation for this year’s brood. Bald Eagles are monogamous and use the same nest every year which they add to every spring. This means that Bald Eagle nests can become very large. The record was a nest in Florida that was 9.5 feet wide and 20 feet tall! Be on the lookout for Bald Eagles flying around with sticks in their talons, they are using those sticks to repair their nests.

The abundant and adorable Eastern Chipmunk is on the move this time of year. This rambunctious rodent does not truly hibernate during the winter, they enter periods of torpor. Torpor is a form of hibernation and is a period of inactivity and lowered body temperatures of animals during the winter that can last from days to weeks. On the other hand, true hibernation is more instinctive, animals that hibernate cannot wake up early from hibernating, all the cues are instinctual and have evolved over time. March is generally the time of year that Eastern Chipmunks leave their burrows in search of mates. They can have two litters each summer, each with 3-7 pups. The pups are born without any fur and their eyes fused shut. Despite this, they are weaned and ready to leave their moms in only about 8 weeks! Even though the pups have to disperse, they generally stay close to where they were born. Chipmunks seem to be much more tolerant of their female pups, so daughters will sometimes continue living with their mothers. Chipmunks make a deep clucking noise to alert other chipmunks in the area about a possible threat, like a predator. Keep an eye (and an ear) out for chipmunks this time of year, they will soon be out and about!

Vultures often get a bad rap because they eat dead things when, in reality, they are part of one of the most important groups in nature: scavengers. Scavengers clean up the landscape by removing deceased animals. This physically cleans up ecosystems, but also aids in controlling the spread of diseases. Turkey Vultures are one of the most easily seen scavengers in Massachusetts. They are all black or dark brown, have pink, bald heads, and a pale bill and legs. Turkey Vultures in Massachusetts migrate south for the winter and return in March. They can be easily identified while flying because their wings form a “V” shape and they appear to wobble as they soar. Turkey Vultures are one of the largest birds found in Massachusetts, but they are often muscled out by the smaller (but much more aggressive) Black Vulture at feeding sites. Keep an eye on the skies in the upcoming weeks, you just might spot a migrating Turkey Vulture!

Look out for March’s full moon, called the Worm Moon, on the 18th.

Rain is a hallmark of spring and a crucial event for amphibians. Many of Massachusetts’ amphibians rely on vernal pools to reproduce. Vernal pools are pools of water filled with snowmelt and rain that go through seasonal cycles of being filled and empty. This means that the pools are dry for part of the year so there are no fish in them. This is a key piece to vernal pools because the lack of fish means the pools are a safe place for amphibians to lay their eggs. Turtles, frogs, snakes, and salamanders are just a few among the many groups that rely on vernal pools in Massachusetts. The frogs and salamanders lay their eggs in the pools and the snakes and turtles come to eat the eggs (or the adults). However, most of them do not live in the pools, but a short distance away. On warm, rainy nights in March and April, these critters make the journey to the pools to reproduce. These mini-migrations can have whole populations of one species moving at once. Roads are a hazard for the migrating animals because they often have to cross roads in order to reach their destination. The animals themselves are slow-moving, so cars are one of the biggest threats to vernal pool species. Keep an eye out for these critters on rainy nights and please drive carefully!

One of the earliest blooming flowers in Massachusetts, Skunk Cabbage is a welcome indicator that spring is on the way. While they may not be the prettiest flowers, Skunk Cabbage are an important part of the ecosystem. They motivate the first pollinators of spring to come out of their hives to feed on its nectar. Skunk Cabbage do this by creating their own heat. The actual flower is covered by a hood-like structure and the air inside the hood is kept around 72℉. This feat is called “thermogenesis” and allows the plant to sprout even when there is snow on the ground. Skunk Cabbage not only feeds pollinators, but its seeds and leaves feed many bird and mammal species as well. Skunk Cabbage is an obligate species for wetlands which means they have to live near a wet environment to survive. So if you find Skunk Cabbage, you are almost certainly in (or near) a wetland. Keep an eye out for these hints of green in wetlands near you!