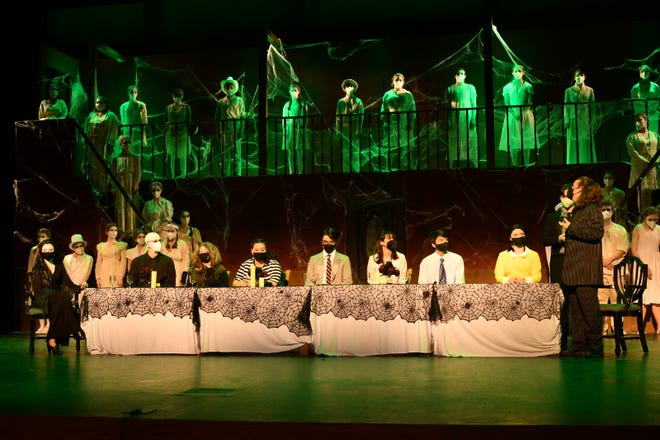 On Saturday, the LSB Players wrapped up their fourth showing of The Addams Family, a play based on the characters created by Charles Addams and originally produced on Broadway. Carly Evans, the school drama teacher, directed the play and the pit orchestra was directed by Michael Bunting and conducted by Thomas Grandprey.

The amazing student actors, set and costume designers, stage managers and sound crew did a fantastic job of bringing the “creepy and kooky” family to life with humor tied to today’s world that allowed the audience to interact with the characters onstage.

Wednesday (Molly Moffat), the play’s main protagonist and her romance with Lucas (Devon Das), a boy from a so called “normal” family, is the source of conflict in the Addams household which the play is focused on. As the parents on both sides, Morticia and Gomez Addams (Alex Foster and Gustavo Molina), and Alice and Mal Beineke (Grace Grandprey and Lucas Flack), struggle to understand and get along with one another, Pugsley (Joey Schmidt-Gross) manages to stir up some trouble with the help of Grandma Addams’ (Celeste Caseria) potions.

As Uncle Fester (Harry Ganz) tries to control the situation and aid the young couple with the Addams family ancestors for back-up, the audience learns that family is not all about being normal and it’s okay to be a little crazy sometimes.

Gustavo Molina’s Gomez Addams was a fan favorite, aided by the soft-spoken but vital Lurch (Justin Miller), the family’s butler, and showed the students the difficulties of being a parent while allowing parents to relate to the play as well.

The pit orchestra did their own take on the classic Addams family theme and had the audience clapping along to the tune while also doing a magnificent job of highlighting the cast’s solos and joint songs throughout the play.

Well-timed jokes and impressive solos were central to the play’s grasp on the audience who were captivated by this look into the Addams family and the reality that they are not such outcasts after all.