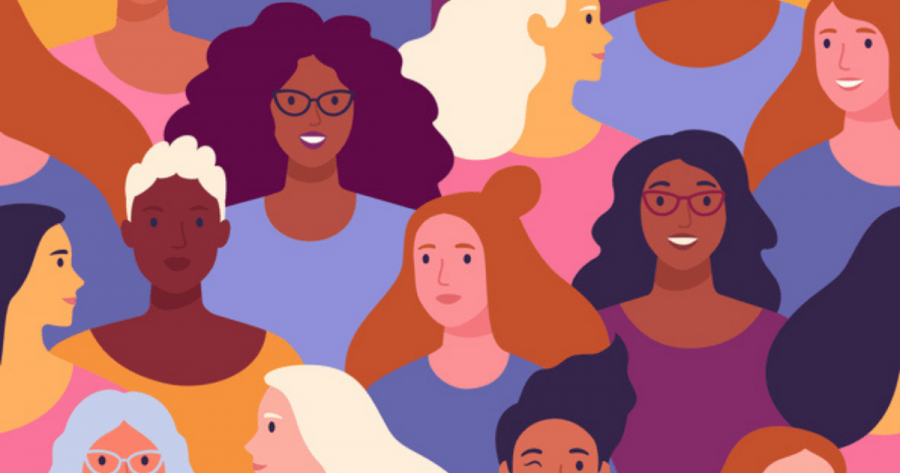 In the wake of a year filled with a constantly changing environment, it was comforting to have something that could unite us. Monday, March 8th was International Women’s Day and the entire month of March is Women’s History Month. To celebrate and remember the contributions of all women to our society, I spoke to two L-S staff members and the Standing Together Empowering Women Club (STEW) to hear their perspectives on both the role of women historically and in our world today.

Throughout history, many strong women have made life-changing contributions. From Marie Curie and Rosalind Franklin to Frida Kahlo and Eleanor Roosevelt and our first female vice president ever, Kamala Harris, it helps us to find strength knowing that other women have walked the walk before us. Head of the Math Department at L-S Lisa Weiss says that she looks up to “women who have done the things they wanted to, even though they were told they couldn’t.”

Ms. Weiss knew a woman in college who had to sit in the hallway when taking a class because her professor would not allow a woman in the room. She passed the class and got a math degree. Overcoming challenges is key. “Breaking the glass ceiling,” as a student from STEW best put it.

Even Ms. Weiss’s mother, who was one of the only women in many of her classes, overcame her own personal challenges to get a degree in Chemistry. Overall Ms. Weiss says, “There are many women who do the hard work with grace and then go on to help others.  Those are the women I admire.”

Associate principal of North House Tracy Ryan and STEW member, Khadijah Ceesay, both indicated that Maya Angelou, the award-winning poet, is one strong woman that they look up to. Ceesay said she was someone who was really “authentic and elegant” which makes her a great person to look up to.

Ms. Ryan also said Malala Yousafzai is someone she respects and said that she most looks up to “strong women who do everyday things and who find ways to make the world a better place.”

Another big aspect of Women’s History Month is the challenges we face even in today’s society, including stereotypes and assumptions just because we are female. One student from STEW said that they would most like to change an assumption about sexual assault. They attested that “in sexual assault cases, everyone always focuses on the woman, not the perpetrator. It is an assumption made all around the world that needs to change.”

For Ms. Ryan, a belief she would like to alter is the expectations around women and emotion. She stated that in society, “our emotion is weakness, yet at the same time, showing our strength or standing by a conviction is a flaw.”

Emotion is a big part of stereotypes around women and conquering careers and areas of life where males dominate. Ms. Weiss gave the example of the facilities provided for the NCAA men’s and women’s basketball tournaments this year. She, along with women and men around the world, feels that “The women’s accommodations were significantly subpar, as compared to the men’s.  The situation made the news, people were horrified and the situation has been remedied, however it still happened and the work to fix it had to be done.” Ms. Weiss sees sexism as something that “women will continue to struggle against for a while,” but says that “women need to speak up and bring on men as advocates too.”

In terms of changes here at L-S, some students from STEW suggest more diverse reading in the English department, such as more female authors and authors of color. Ms. Weiss suggested a new kind of math class, “Wouldn’t that be a great course at L-S – Women in Mathematics throughout History!”

Change is coming. Ms. Ryan acknowledges that, “There is a marked gender gap in school leadership.” But she also attests that, “We are making progress and more than half of public school principals are women.” Teaching for women was always thought a suitable profession, with Ms. Weiss stating that, “ I worked very hard to succeed as a teacher and still, so many people said to me ‘what a great choice for getting ready to raise a family.’” Women leading and continuing to lead will take some getting used to for some, but it should not.

Ms. Weiss hopes that, “if a woman today makes a similar choice, the comment will be: “how wonderful that she is going to work to help share the joy of learning, to spread the excitement of mathematics and to support the growth of teenagers.’” Hopefully it will become the norm. Ms. Ryan says a challenge for this generation of women, as more positions and opportunities arise in the workforce, will be balance. She says, “I am a school leader, an educator, a spouse, a parent, a friend, and a daughter.  In order to do all of those things well, you must find balance.”

Just because women are gaining opportunities does not mean feminism isn’t needed. It needs to grow and evolve for the next generation to continue their own way. As two students from STEW affirm, “Some change is not all change, we need a seat at the table!”

Thanks to all the great women here at L-S! Keep breaking barriers and paving paths for the women who follow in your footsteps!